skip to main | skip to sidebar

The lilies are always welcome in the aloe garden. They remain in the ground during the resting period and appear again each year to brag a little with their pretty flowers. 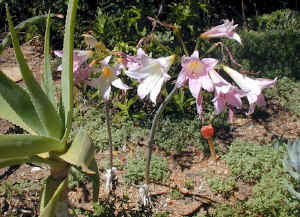 Ammaryllis belladonna a scented lily endemic to the Western Cape Province, South Africa. The wild lily is as lovely as the cultivated lilies of this very popular genus. It blooms in March and is known by the name Marchlily, which is a pity as what could be prettier than the name Belladonna.
The smaller bright red Haemanthus coccinius (just behind the lilies photo above) is starting to open too. 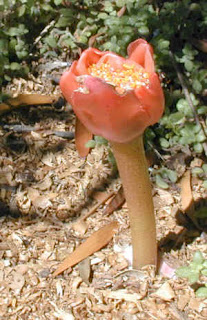 Haemanthus coccinius. A month early for this lily but it might be the heavy rain shower we had in February that confused the lily. The flower is not fully open and smaller than it should be, but it is welcome all the same. 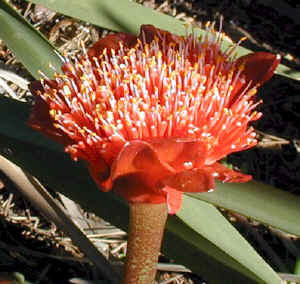 Four days later and the Haemanthus coccinius lilies are open. It is obvious why this lily is known as Paintbrush.
Posted by ericat at 5:24 AM

Hello,
just found your blog online and hope you have the time:-)) to visit
my blogs.
Your flowers are quite beautiful.
cheers from Toronto Canada
Gisela

The pink lily looks a lot like my surprise lily, the flowers are shaped just a bit different, great blog, I am enjoyed all your posts.

I thought Haemanthus coccineus only bloomed well after fire? Am I confused or does it flower more reliably in cultivation?

I am not an expert on lilies, they are companions for my aloes. That lilie grows here on the hills where fire is rare. I read up in the books I have but no mention on fire for the Haemanthus species growing in the western Cape. It is winter rainfall without thunderstorms and lightning so fires are not natural. Having said that H.coccineus is widespread. From the weatern coast to Grahamstown on the eastern coast and North up to Namibia. There they will be in fire zones. I think you can take it they do not need fire. They grow and bloom very easy in the garden as we rely most of the time on the rain without extra watering.

ericat
Retired for some years. Rudi and I enjoy our aloe garden as well as our cats - doing very well in shows. We imported the first American Curl cats into South Africa of which studs are grand international champion and RSA supreme champion.